Taseko Mines president Russell Hallbauer is getting desperate. He now claims that it's not fair that First Nations get to pray and perform traditional ceremonies at mining review panels. Talk about a clash of cultures!

Mr. Hallbauer makes a lot of money promoting mines. In 2009 he made $2.255 million providing "management and administrative services" to a number of different mines, including Taseko:

Hallbauer is playing the underdog card to the Federal Government which, by the way, is moving to strip federal environmental legislation that currently gets in the way of economic progress:

In a letter to federal environment minister Peter Kent, Taseko president Russell Hallbauer complained last November that the “fairness and objectivity” of that the first panel review was tainted by allowing a first nations activist to sit on the panel.
The panel gave “priority status to the interests and perspectives” of first nations by allowing aboriginal prayer ceremonies at the opening of the hearings, he wrote. And science was given short shrift when the panel allowed a group of kindergarten children to present a play “in which the children wore fish cut-outs on their heads, moved around the floor, and then all fall over simultaneously, symbolizing the death of the fish.”   Globe and Mail


Just Trying to Be Helpful

Taseko Mines president Hallbauer made other helpful suggestions as well, including:

Hallbauer felt that allowing First Nations to be on panels, drum and be spiritual is just not cricket, and that they had the "effect of giving priority status to the interests and perspectives [of] aboriginal people". 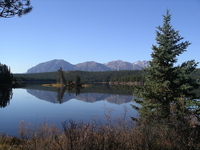 That makes me wonder, if the people of Kamloops stood up and objected the proposed open pit just south of the city, would it be unfair to let them speak at a panel hearing in case it gave their perspectives a priority status?

I thought that was the point of speaking at the hearing, to have your voice heard. This is a democracy and the panel hearings are part of the democratic process.

Folks who live close to a proposed mine site will obviously feel different effects (effects: acid mine drainage, toxic dust, constant noise, death of a lake, loss of a spiritual place) than the folks who own the mineral claim (effects: maintain membership in Shaughnessy Golf and Country Club and summer home in Gulf Islands).

My view is that aboriginal rights and environmental protection are two basic tenets of Canadian society. The Tsilhqot'in have every right to bring their views to the table and their rights and title to the land do indeed trump the rights of other players.

Not only that, as Stephen Harper drops environmental legislation like a hot potato and David Suzuki is branded a foreign-backed terrorist, First Nations effectively become the only capable protectors of the environment.

You don't have to be rich to be powerful!
Posted by Unknown at 8:05 AM

Promote Your Page Too

Me and the Cariboo forests...